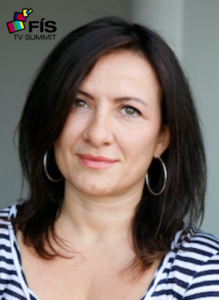 Award winning international Screenwriter and Showrunner Emma Frost joins the roster of speakers for the FÍS TV Summit (Fís) this January. With credits including, Shameless, The White Queen, The Man In The High Castle and The Spanish Princess, Emma has led an illustrious career to date having also worked as a Script Editor at Eastenders and Development Executive at BBC Drama in her early days.

Emma Frost In Conversation, presented in association with MediaXchange is the second event of the dynamic Fís line-up to be announced and joins the keynote interview with Anne Mensah, VP of Original Content at Netflix. More Irish and international speakers from companies including as Channel 4, Sky and Acorn will be revealed shortly. The digital conference will take place from January 25th – 27th.

Registration is now open. Tickets for the virtual Summit are free but will be limited so be sure to register early HERE. The full schedule including all speakers will be announced next week.

Further information can be found at www.galwayfilmcentre.ie and/or follow the hashtag #FÍSTVSummit on social media.

Born in Essex to a hairdresser and a second-hand car salesman, it was obvious to no-one that Emma would have a career in film and TV. Emma wanted to be a famous painter (or die trying) but getting a 1st Class Hons Degree in Visual & Performing Arts at Brighton University (when it was still called a poly) prompted her to volunteer at the Edinburgh Festival… and she ended up stage managing a production of MacBeth, performed entirely on tiny Inchcolm Island in the Firth of Forth, a 30 minute ferry ride from Edinburgh, civilization and any kind of electricity generator.  She learned a lot about tide times and at what point sleep deprivation makes you hallucinate. Moving to London, she was exploited as an unpaid intern at a company producing terrible training films, but it came to a grisly end when she told an actor (who happened to be wearing a radio mic) that her boss was a lizard… and he was wearing cans and heard it all in perfect stereo. She escaped to Europe as a runner on The Pet Shop Boys’ “Performance” tour… then returned and talked a comedy exec into trying her out for reading work… which led to a script editor role on EastEnders; a Development Exec job at BBC Drama; and Head of Development roles at two indies. Everything was going too well, so she threw it all in to become a writer. A commissioner told a producer she was under commission to that Emma would never make it as a writer… which only made her more determined to prove them wrong, and the excellent training ground of Doctors and Casualty gave way to Emma’s first original piece, the stage play Airsick, which was produced by The Bush Theatre, directed by Mike Bradwell.  The Guardian’s Michael Billington said “Promising enough to make you hope for a recurring Frost.”

Emma became a lead writer on seasons III-V of C4’s multi-award-winning dramedy Shameless, and her episode starring Anne Reid was nominated at the 2009 BAFTA TV awards.  She was equally proud to have penned a line so filthy that the cast and crew weren’t sure they could film it.  Emma’s original film BBC4 film Consuming Passion starring Olivia Colman attracted critical acclaim with Caitlin Moran writing “Consuming Passion pops with focus and energy”, and The Times gave it 5 stars, “Frost’s script was wickedly clever”. Film commissions followed from Universal Studios, Sony, Working Title, BBC Films and Origin Pictures. Screen International named her a ‘Star of Tomorrow’ on their movie talent list.  She graduated the WGA’s prestigious showrunner training programme but made time to remain a trustee for children’s educational arts charity ANNO’s AFRICA, working with AIDS orphans and vulnerable children in Cape Town and the Nairobi slums. Emma produced comedy fundraising galas in London every year for a decade, and flew to Africa to teach the children theatre design and mask making. Back to writing, she adapted Daphne du Maurier’s Jamaica Inn for BBC1. Radio 4 Front Row called it “terrific” “the adaptor is to be congratulated”.  She worked on Julia Davis’s award-winning comedy Nighty Night; wrote on Sky Atlantic’s The Tunnel; and season 1 of Amazon’s Philip K. Dick adaptation, The Man In The High Castle.

Now working as a showrunner, her 10 hour BBC1/Starz co-production The White Queen, starring Rebecca Ferguson, was nominated in 2013 for three Golden Globe Awards, including Best TV Movie or Miniseries, and four Emmys, including Outstanding Miniseries.  The relationship with Starz (and Chris Albrecht) continued with her critically acclaimed follow up, The White Princess starring Jodie Comer. Finally, and now working in partnership with real-life partner Matthew Graham, they completed the trilogy with two seasons of The Spanish Princess starring Charlotte Hope. Emma continues to be busy in movies, penning screenplays for Focus Features; Universal; 51 Entertainment; Bruna Papandrea’s Made-Up Stories; and for Ron Howard movie Zelda to star Jennifer Lawrence. Her current movie commissions are an adaptation of a bestselling novel for Netflix films; and adaptation of JoAnn Chaney’s novel As Long As We Both Shall Live, co-written with Matthew for Made-Up Stories.

In November 2020, Emma & Matthew launched their own Bristol-based production company Watford & Essex with backing from Chris Albrecht in his new home at US studio, Legendary Global.  Watford & Essex will produce high end domestic and international dramas, and already has a hefty slate of projects in development from Emma, Matthew, and other “A” list and emerging writers.  Emma’s current writing commissions include an adaption for a returnable TV drama for Electric Shepherd Productions/Amazon Studios; original comedy-thriller for the BBC; and Emma and Matthew have true crime drama Judas in advanced development with Amblin/HBO Max. Her proudest claim to fame though is that she was once appointed Sheriff of Hillsboro, New Mexico, a post which, as far as she knows, she still holds.

Based in Los Angeles and London, MediaXchange is a media consultancy assisting entertainment industry professionals to develop effective knowledge, contacts and business in the international marketplace. Founded in 1991 by CEO Katrina Wood, MediaXchange’s roster of returning clients and new participants from around the world encompasses studios and networks, creative and business executives, writers and developers, financiers and filmmakers, government agencies and industry associations. www.mediaxchange.com.

Previous Are You Developing A TV Drama Or Slate of TV Projects? The FÍS Project Clinic 2022 with Industry Experts John Yorke and David Clarke Is Seeking Applications
Next Announcing the 2nd annual FÍS Games Summit 2022 with Emil Pagliarulo | February 24th