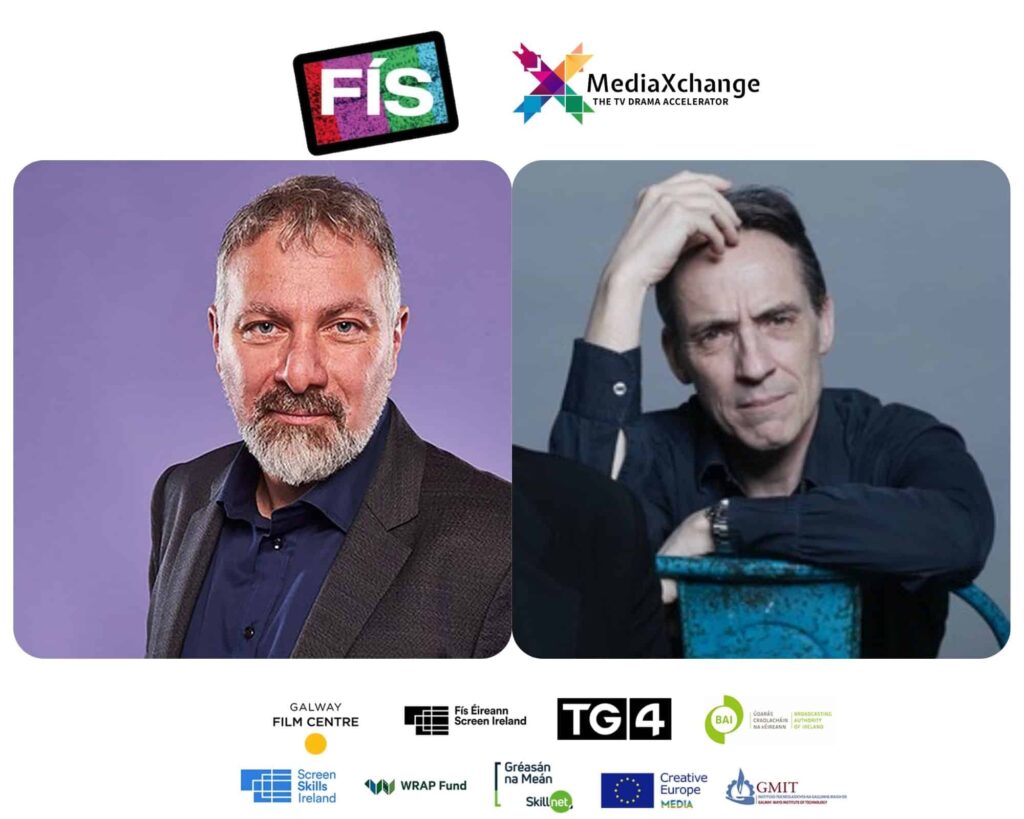 Having created some of the worlds biggest dramas, the pair have an extensive working relationship formed over many years and will discuss for the first time together their careers, collaborations together and give their insights into what it takes to create shows that have the potential to delight and enthral an audience.

John Yorke & Jed Mercurio In Conversation, Presented by MediaXchange  is the second event of the dynamic Fís line-up to be announced and joins the keynote interview with Georgia Brown, Director of European Amazon Original Series for Amazon Studios. The digital conference will take place from January 25th – 28th.

This Fís event is delivered in association with the international scripted consultancy, MediaXchange. Fís is organised by the Galway Film Centre in partnership with Screen Ireland and TG4 with support from Broadcasting Authority of Ireland (BAI), Gréasán na Meán Skillnet, Screen Skills Ireland, Creative Europe Media Desk, GMIT and the WRAP Fund.

The full Fís schedule will be announced shortly with details of the speakers and other events. Registration is now open. Tickets for the virtual Summit are free but will be limited so be sure to register early HERE.

Jed Mercurio’s latest series Bodyguard and Line of Duty have both topped the ratings for UK television drama. With other credits including Bodies, Lady Chatterley’s Lover, Critical, Strike Back, The Grimleys and Cardiac Arrest, Jed’s work has achieved award wins/nominations at the Golden Globes, Emmys, BAFTAs, Royal Television Society, Broadcasting Press Guild and Writers’ Guild. He is a former hospital physician and Royal Air Force officer, having originally planned to specialise in aviation medicine.

John Yorke is Managing Director of Angel Station where he works as a drama producer, consultant and lecturer on all forms of storytelling. A former MD of Company Pictures where he Exec Produced Wolf Hall, he’s worked as both Head of Channel Four Drama and Controller of BBC Drama Production. As a commissioning Editor/Executive Producer, he championed huge British hits such as Life On Mars, The Street, Shameless and Bodies. In 2005 he created the BBC Writers Academy, a year-long in-depth training scheme which has produced a generation of successful television writers – many who have gone on to have their own shows.  The author of INTO THE WOODS – the biggest selling screenwriting book in the UK for the last six years, about how and why we tell stories – John is a double BAFTA winner (as programme maker) and multi-BAFTA winner (as commissioner). He is also Visiting Professor of English Language and Literature at the University of Newcastle-upon-Tyne. He lives in London but works as a story consultant worldwide.

The 2021 edition of Fís runs from January 25th – 28th as an online event offering an array of speakers, case studies and panel sessions focusing on the theme of Knowing Your Audience. Fís looks at the television landscape and the current trends, challenges and opportunities as well as creating a chance for Irish talent to connect and network with Irish and international television professionals. Now in its fourth year, past guests at this Galway event have included Sarah Phelps (Dublin Murders) Vince Gilligan (Breaking Bad), Beau Willimon (House Of Cards), Jimmy McGovern (Cracker), Sarah Phelps (Dublin Murders) and Rachael New (Miss Scarlet & The Duke). Fís has also become a key component in the UNESCO City of Film/Ceantar Scannán calendar.

For more see www.galwayfilmcentre.ie/category/fis-tv-summit/ and/or follow #FÍSTVSummit on social media.