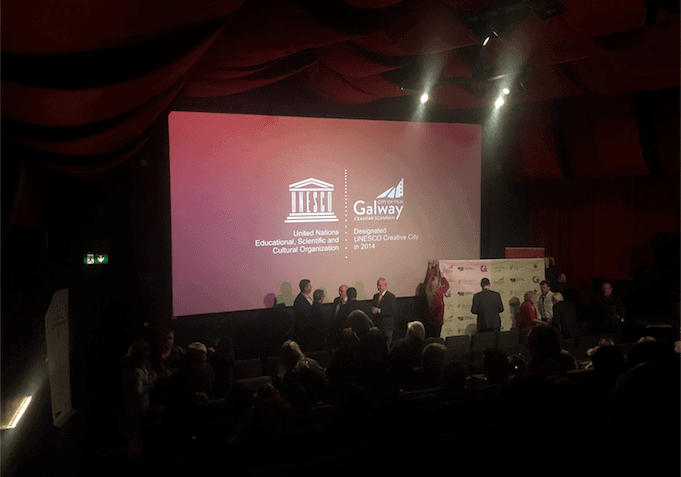 A special industry event held last night in Galway celebrated 2 key anniversaries in Film in the city. In 2014 Galway became the fifth city in the world to achieve the status of UNESCO City of Film, in recognition of the rich history and vibrant culture of filmmaking that continues in the city and county to this day. Galway City of Film is now celebrating its 5th anniversary of that recognition, and is taking a wonderful opportunity to look back at what has been achieved so far.

In a happy coincidence, this year also marks 30 years since the founding of Galway Film Centre who manage the UNESCO designation on behalf of Galway City Council and Galway County Council. The organisation has flourished from the seed sown by a group of aspiring filmmakers and continues to be a safe haven for young and aspiring talent today. In addition to operating Workshops and Schemes throughout the year the Film Centre is an industry representative body lobbying within Ireland and overseas on behalf of local and national industry. It was one of the lead organisations in the bid for UNESCO City of Film, and to date GFC have been involved in setting up the WRAP Fund, a regional fund committed to strategic investment within the WRAP Region and the Fís TV Summit, a national TV Summit held every year in Galway. The Centre also facilitates inward production support through ScreenWest and the Galway Film Partnership.

With the confluence of these two events came a unique opportunity to present our Galway UNESCO ‘City of Film/Ceantar Scannán’ Award to local film producer Lelia Doolan. An honour that has only been presented to one other recipient, Uachtaráin Michael D Higgins. It is difficult to think of anyone that has contributed more to the local and national film industry than Lelia Doolan and Galway City of Film wish to honor her and her legacy of incredible work by presenting this award to her as part of our celebrations.

The award presentation was followed by a screening of Cumar – A Galway Rhapsody, a feature film directed by Aodh Ó Coileáin and produced by Paddy Hayes celebrating Galway artists including Rita Ann Higgins, Tommy Tiernan and Noeline Kavanagh.