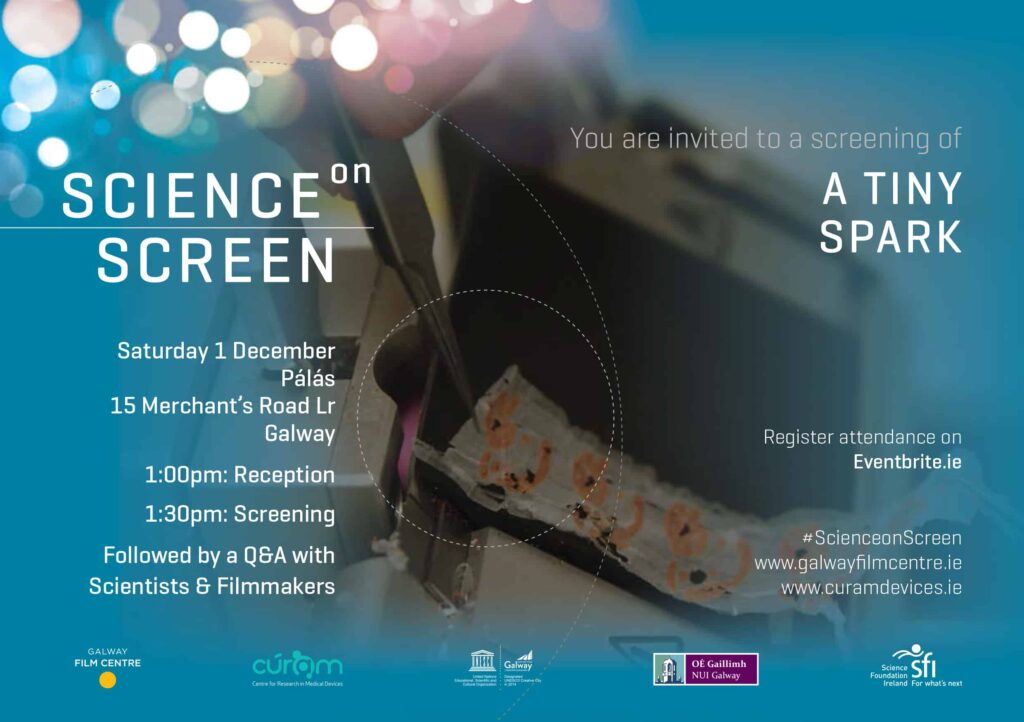 Followed by a Q&A with Scientists and Filmmakers

Tuesday, 20 November, 2018: CÚRAM, the Science Foundation Ireland Centre for Research in Medical Devices based at NUI Galway and Galway Film Centre’s 2018 ‘Science on Screen’ documentary, A Tiny Spark will have its world premiere at Pálás Cinema in Galway on Saturday, 1 December at 1pm.

Directed by Niamh Heery and produced by Caroline Kealy of Swansong Films, A Tiny Spark examines the effect of cerebrovascular illness and stroke on people’s lives and specifically looks at research into the blood clots that cause stroke. With a mixture of dramatic first person accounts and beautiful animation sequences highlighting the functions of the various parts of the brain, A Tiny Spark is a film about science’s ability to affect real change for human life.

A Tiny Spark focuses on stroke and cerebrovascular research being led by Neuroscientist, Dr Karen Doyle from CÚRAM and Galway Neuroscience Centre in NUI Galway, which involves analysis of removed blood clots to see what information they may yield. This is the first study of its kind in the world and is an international collaborative study between NUI Galway, hospital partners in Beaumont Hospital and throughout Europe, and the Mayo Clinic in the US. The research is carried out in partnership with Cerenovus.

This documentary highlights the groundbreaking research being carried out by Dr Doyle and her research team at NUI Galway. For the first time ever they are analysing thousands of stroke-causing blood clots collected from patients around the world. These little bundles of cells could carry a wealth of information, which could point to big improvements to people’s lives by improving stroke prevention and treatment. In the film we meet three incredibly brave stroke survivors who show us that it is sometimes the little things that people miss in life after a stroke, or the small victories during recovery that mean so much.

Contributors to the documentary feature individuals who have had a stroke: Rebecca Slattery from Dublin who had a stroke shortly after she turned 30 and became a new Mum; Trevor Neville from Limerick, a father of two who had a stroke aged 31; and Helen Liddy from Clare who suffered a stroke aged 63 in 2016. Dr John Thornton, Consultant Neuroradiologist, Beaumount Hospital, and Helena Heffernan, Stroke Group Coordinator, Irish Heart Foundation also feature in the documentary.

Professor Abhay Pandit, Scientific Director of CÚRAM at NUI Galway, said: “This year’s film will focus on stroke and clot research which is yet another area of research which will have a significant impact on audiences all over the country. These stories, narrated through our Science on Screen documentaries, show the real challenges that people face when living with chronic illness but also how we are trying to address them here at CÚRAM, to improve quality of life for all.”

Galway Film Centre Manager, Alan Duggan, said: “The Science on Screen commission scheme shows the real human side of the application of science. We are delighted to continue working with CÚRAM on this scheme and we will be supporting Niamh, Caroline and the filmmaking team in bringing ‘A Tiny Spark’ to the screen this year.”

The 2018 ReelLife Science primary school winning videos will be screened before the world premiere of A Tiny Spark, followed by a Q&A with Dr Karen Doyle and her research team, and with documentary producer, Caroline Kealy and director, Niamh Heery.

The Science on Screen scheme has been running since 2016 and has awarded €35,000 each to three previous documentaries on topics such as Parkinson’s disease (Feats of Modest Valour), tendon injury (Mending Legends) and diabetes (Bittersweet: The Rise of Diabetes). The films have reached audiences of over half a million people and have received success at festivals internationally. Full details on all previous Science on Screen films can be found here: www.galwayfilmcentre.ie/category/science-on-screen and http://curamdevices.ie/curam/public-engagement/science-on-screen/.

This event is run with the kind support of the Department of Culture, Heritage and the Gaeltacht.