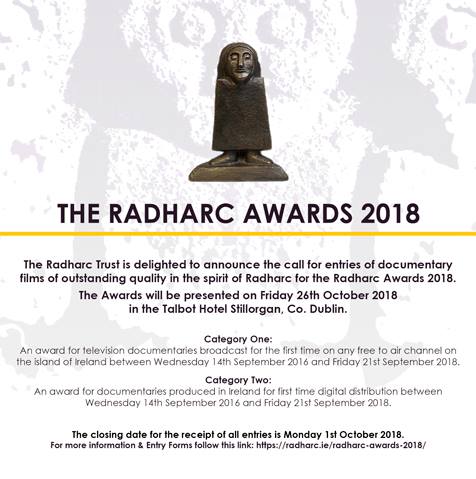 Radharc have announced a Call for Entries for the Radharc Awards 2018 to take place in October.

The Radharc Awards seek to celebrate excellence in documentary filmmaking and to acknowledge films of outstanding quality in the spirit of Radharc.  Awards are presented every two years to the producers of documentaries for Television and Digital Media which are of outstanding quality and that address national or international topics of social justice, history, morality and faith.

The producer of the winning production for Television will receive the bronze Radharc trophy.

Category One: An award for documentaries broadcast in the qualifying period on any free to air channel on the island of Ireland.

Category Two: An award for non-broadcast documentaries produced during the same period for digital media.

The closing date for entries is  the 1st October next, for films made between 14th September 2016 to 21st September 2018.