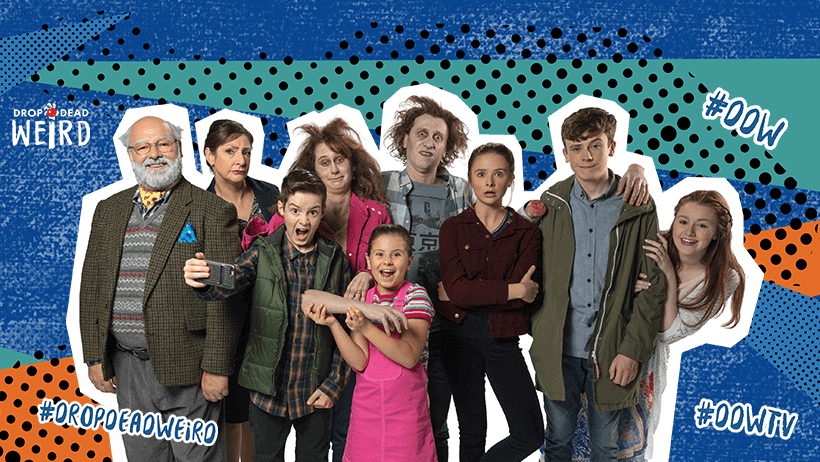 via the Galway Advertiser, Charlie McBride

RTÉ 2 are now broadcasing Drop Dead Weird, a madcap teen comedy following the hilarious antics of an Australian family who move to a seaside village in the west of Ireland to run a B&B.

Sibling squabbles, culture shock, and the transformation of both parents into zombies combine for a very funny television treat which could well become cult viewing over the weeks and months ahead (there are 26 episodes). Taking the role of the family’s eccentric grandfather is one of Galway’s best known actors, Maeliosa Stafford, long-time stalwart of Druid, and co-founder of leading Sydney ensemble, O’Punsky’s, with whom he does most of his work these days.

Over a Saturday evening chat by Skype, Maeliosa reflected on his career and enthused about his new foray into a TV world of zombies and unruly teens. I caught him in high good humour as he was relishing the rave reviews coming in for O’Punsky’s just-opened production of Conor McPherson’s The Night Alive which Maeliosa directed. “It’s been fantastic. Working with McPherson is like working with mercury, Conor speaks like David Mamet, but better. This play is a wonderful piece of storytelling that goes from hell through purgatory to heaven.” I ask might he ever bring O’Punsky’s to Ireland? “I would love to bring this show back to Ireland with these Australian actors because they are brilliant!” he declares emphatically. “Tell the arts festival!”

Maeliosa could be said to have been born to theatre as his parents Sean and Maire were mainstays of An Taibhdhearc for many years and it was there he made his own first, unscheduled stage appearance, as he recalls with a smile.

“I was about six and being baby-sat in An Taibhdhearc one night while mum and dad were in a play. I was wondering what was going on as I could hear the actors’ voices on the tannoy so I went upstairs into the wings and saw my parents onstage. I walked out onto the stage and said ‘I’m bored and I want to go home’ and that was my stage debut. There was an instant round of laughter and applause and I suddenly became aware of the audience and I kind of liked it! I was blessed to have theatrical parents and have that kind of introduction.” 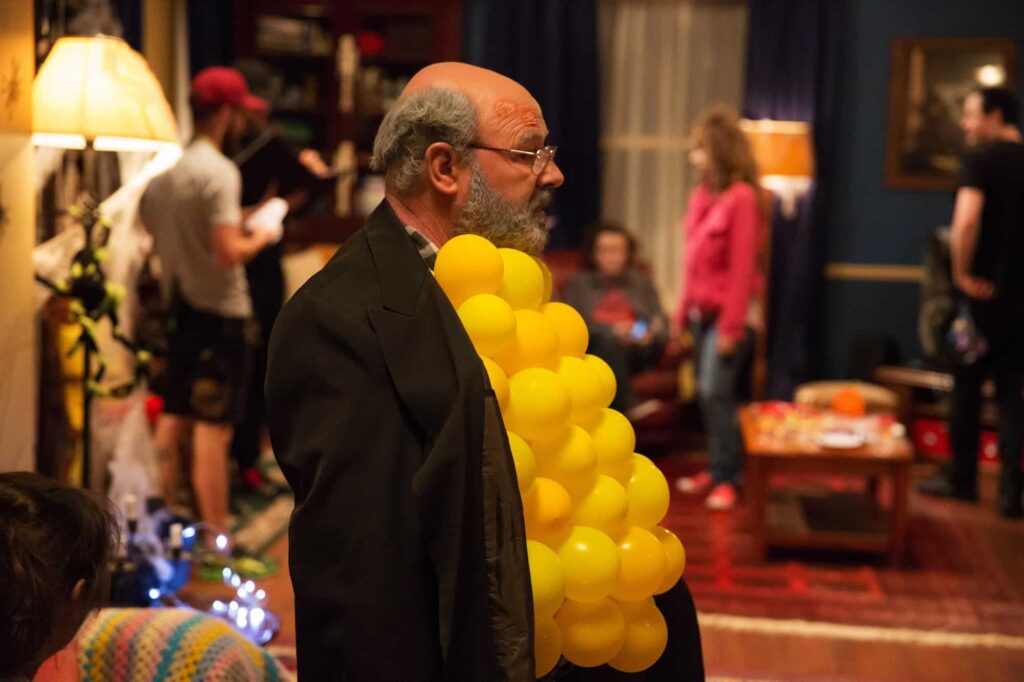 It was some years later, while at UCG (as it then was) that theatre became more serious when Maeliosa hooked up with Garry Hynes. “In my first year in college I was actually more into playing rugby than theatre,” he reveals. “I had been scrum half with the Jes and we won the City Cup twice and reached the Connacht final twice. It was only in my second year that I got into Cumann Dramaiochta and then Dramsoc asked me to be in Philadelphia Here I Come! and Our Town which is the show where I met my first wife, Joyce. Garry and Marie Mullen had just set up Druid and they came along to see Philadelphia and afterwards asked me to join them and I said ‘OK’ and dropped out of college to do so. My dad just asked me to sort it out with my dean – I was studying commerce – and I went to him and he said ‘OK, go for it’ and he gave me a 10 year leave of absence. So I went for it with Druid and never looked back.”

Maeliosa was soon a key member of Druid’s acting company and it was not long before he also began directing. “I first directed at Druid in 1980 or ’81. I had no idea I had any talent in that field so full praise to Garry who said to me one day ‘Maeliosa, you are perceptive, in rehearsals you offer suggestions that I get – would you like to direct a lunchtime show?’ I was scared but I said yes. I ended up doing Galway Girl and then I went ‘Oh I like this’. Full praise to Garry for encouraging me, she spotted something that I had no idea I had but it was probably in my DNA as both my parents had directed shows.”

And so to Drop Dead Weird. The comedy is an RTÉ/Seven production in association with Telegael and Ambience Entertainment & Airpig (Australia). The series was shot on location in both Australia and the west of Ireland with all the post production taking place in An Spidéal. Maeliosa tells me how he came on board.

“I was home in Galway visiting my dad last year and got a call from my agent saying this series was coming up and they were interested in me playing the grandfather and I should contact Telegael,” he says. “So I went out there to meet over a coffee and they told me it was a 26-part series and that they were thinking of Pauline McLynn for a central role as well which I was delighted to hear. We’ve known each other for years and acted together before. There are five Australian actors and five Irish in the cast; Pauline plays the local busybody and is kind of the villain of the show. My character, the granddad, is into skydiving and marathons and all sorts of carry on. The series is beautifully written, it’s like Fawlty Towers for kids. Pauline was saying that with Father Ted they never knew while making the first season if it was good but she said about Drop Dead Weird ‘I already know this is great.’”

And what about the zombies? Maeliosa explains; “The family’s mum and dad go out for a walk and come back as zombies. They are played by Amanda Bishop and David Collins, two of the best comedians in Australia and they are very funny. Their characters don’t speak so it is all this brilliant visual and physical comedy. The three kids have to run the hotel and stash the parents in the basement, away from the guests. We also have David Rawles from Moone Boy so there is fabulous talent on the show.”

While the series has only just started in Ireland and does not hit Australian screens until next month, the programme makers are already so delighted they have committed to an enhanced second series.

“They’d never made a 26-part kids series before and before this series has even begun they have already commissioned a second 26-part series,” Maeliosa notes. “All the episodes in this first series were filmed in the studio, though Telegael did some second unit shooting of external Connemara scenes. But for the second series they plan to do at least three weeks in Ireland with outdoor settings so they are investing more money in it. We’re all really looking forward to doing it and getting the Aussie actors over here to Ireland.”

Drop Dead Weird is on RTÉ 2 every Monday at 5.30pm and see a promo here: