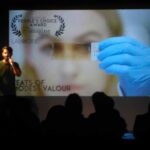 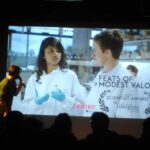 After eight days of science films from all over the world, the Irish Parkinson’s disease documentary, Feats of Modest Valour, won the prestigious Scientist Award at the Imagine Science Film Festival in New York last week. The Scientist Award is awarded by the leading international science journal, Science, and its publisher, the American Association for the Advancement of Science (AAAS), to a film that portrays in an accurate and inventive way the life of a scientist. The select jury included Nobel prize-winning scientist, Professor Martin Chalfe, and award-winning science columnist for the New York Times, Professor Carl Zimmer.

In Feats of Modest Valour, three individuals live clockwork existences, dictated by a strict regime of medication to manage the physical reality of living with Parkinson’s disease. Brian Carney is a farmer from County Mayo whose son had to take over the running of the family farm from a very young age; Milena Lulic is a Croatian World War II survivor who faces her condition head-on with great dignity; and Tom Hickey, the Irish actor, talks about how suffering for his art takes on a whole new meaning with the disease. Interwoven with their stories, we see researchers at Centre for Research in Medical Devices (CÚRAM), led by Dr. Eilís Dowd from National University of Ireland Galway, who are developing a novel therapeutic approach which they hope will revolutionise treatment of the condition. Guided by stunning animated sequences, we delve into the brain of someone with Parkinson’s disease, and see how dying cells can be replaced by stem cells supported by a natural biomaterial “scaffold”. Speaking about the film, Dr. Dowd said “This is a film about science and medicine, about scientists and patients, about art and music, but most of all, about hope. It was a genuine privilege to work on this project with such talented filmmakers and such inspirational patients.”

Feats of Modest Valour is co-directed and co-produced by Mia Mullarkey and Alice McDowell of Ishka Film. The film has screened at numerous community events and at film festivals here in Ireland and across Europe with both Alice and Mia recently being invited to Germany to screen the film at the dokumentART Film Festival in Neubrandenburg. Feats of Modest Valour is due to be screened on RTÉ 1 on Sunday 12th November at 10:30pm and to find out more about the film, see www.featsofmodestvalour.com.

Feats of Modest Valour was produced through the Science on Screen initiative between CÚRAM, Science Foundation Ireland and the Galway Film Centre who manage Galway’s UNESCO City of Film designation. Science on Screen was conceptualised as part of CURÁM’s Public Engagement Programme, and aims to facilitate, promote and increase the inclusion of science, technology, engineering and maths (STEM) content in Irish film and TV production. Commenting on the initiative, Prof Abhay Pandit, Scientific Director of CÚRAM said ‘Together with Galway Film Centre we could see the potential of film for bringing science to life, and we are very proud of ‘Feats of Modest Valour’, for winning this major international award”.