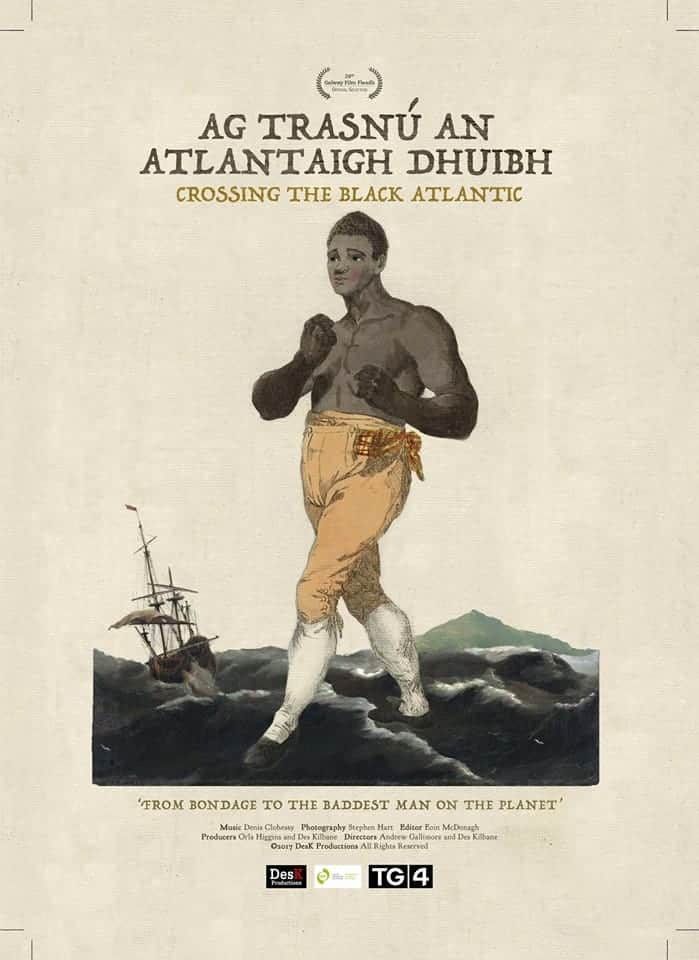 From bondage to the baddest man on the planet describes the life and times of Tom Molineaux whose story is told in Ag Trasnú an Atlantaigh Dhuibh (Crossing the Black Atlantic), the latest film from Galway-based documentary company DesK Productions which had its world premiere at this year’s Galway Film Fleadh.

Directed by Des Kilbane and Andrew Gallimore, the documentary is an action-packed narrative laced with southern belles, fights to the death and tales of debauchery and destitution all seen through the eyes of a compelling but tragic character. Having saved his owner’s plantation in Virginia by winning a fist-fight, Tom Molineaux sailed to England where he challenged the Heavyweight Champion in a contest that’s still considered one of the most shameful episodes in British sports history. Molineaux was cheated of the title and of all his money, so the first American sporting hero fled to Ireland where he died in poverty in 1818.

According to Andrew Gallimore ‘it’s a chains-to-riches-to-rags story of someone given the opportunity of a new life only for it to end in tragedy through shadowy deals, rigged fights, and racism’.

The story of how this freed slave, turned champion boxer, ends up in a Galway grave is a brutal epic in its own right, but the documentary also holds a mirror up to a conveniently ignored aspect of Irish history – its role in the slave trade. Des Kilbane says that ‘the film tells the tale of those who participated in the creation of the Black Atlantic and the way in which Ireland’s economy and politics were transformed by its participation in the slave trade’.

Kilbane describes how Gallimore approached him in 2012 about Molineaux’s long forgotten story and the possibility of a Galway connection. With the help of Galway historian Tom Kenny, Kilbane discovered that Molineaux was buried in a pauper’s grave in Mervue, ironically close to the graves of the Lynches, Galway’s most powerful family of that era. The film will also show rarely seen footage of When Giants Fought, a 1920s recreation of the controversial fight between Molineaux and Tom Cribb, the English champion at the time. Medieval Galway is brought to life using animation created by innovative Galway based company RealSim.

The documentary was commissioned by TG4 and was part-funded by the Broadcasting Authority of Ireland. It was filmed on location in the grand old plantation houses and slave quarters of Virginia (including the ancestral home of Confederate General Robert E. Lee) as well as in New York, Dublin, Limerick and Galway.

Ag Trasnú an Atlantaigh Dhuibh (Crossing the Black Atlantic) will be broadcast on TG4 on Wednesday 18th October 2017 at 9.30pm.