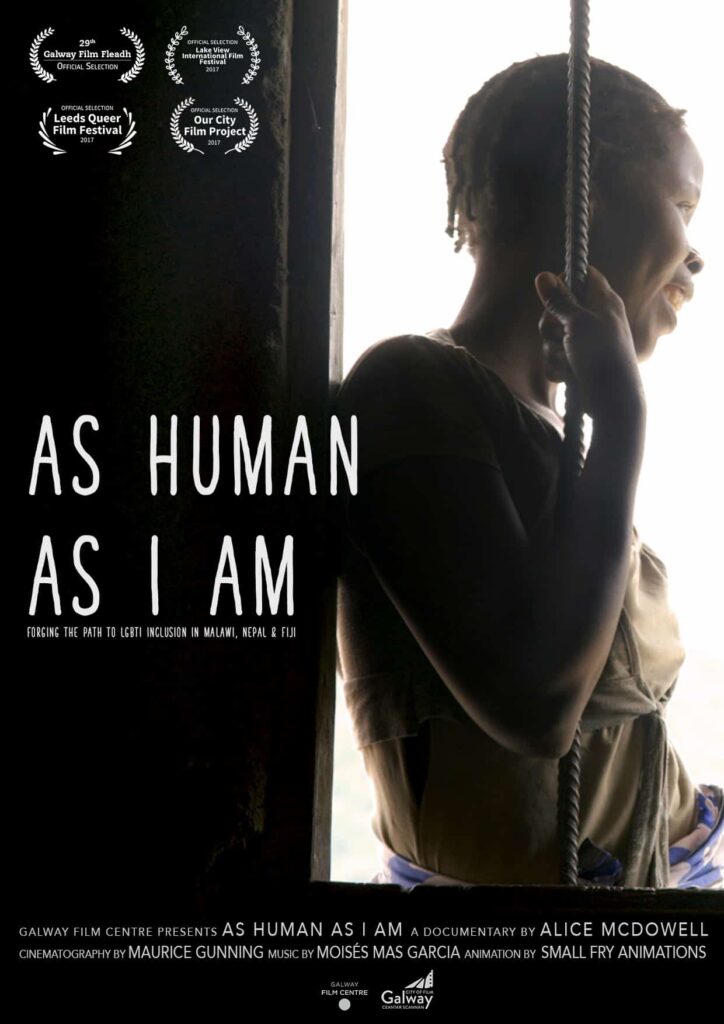 What: FREE Screening of documentary As Human As I Am
When: 7pm, Tuesday 15th August
Where: Teach Solais, Merchants Road, Galway City

Galway Film Centre is delighted to release ‘As Human As I Am’, a new documentary presenting inclusion stories and strategies for LGBTI communities in Malawi, Nepal and Fiji. The film captures how civil society organisations in these countries have worked to overcome discrimination and persecution of sexual and gender minorities, achieving important results in generating constructive debate and, in some instances, social and political acceptance.

Directed by Alice McDowell, As Human As I Am documents a number of LGBT+ projects from around the world, helping advance LGBT+ inclusion and rights in Malawi, Nepal and Fiji. Following the screening in An Teach Solais (30 minutes), there will be a panel discussion with the director and other guests about the film and LGBT+ inclusion in the wider sense both in Ireland and throughout the world.

The film highlights the strategies that LGBTI activists in Malawi, Nepal and Fiji have used in seeking to overcome exclusion and specifically how they have sensitised and indeed re-educated media, religious leaders, politicians and citizens to see LGBTI people as being as human as they are. Importantly, the film reveals perhaps one of the most effective long term approaches to changing attitudes towards LGBTI people. This is the work exemplified by Lionel Rogers, a Peer Educator and Director of Fiji’s Youth Champs 4 Mental Health, who works with children in schools to broaden their understanding of the issues experienced by LGBTI children and young people, and promote their social acceptance. By adopting legal and political frameworks, Nepal’s Blue Diamond Society has inspired changes to Nepal’s school curricula and citizenship laws, which now recognise and respect the rights of ‘third gender’ people. In Malawi, the Centre for the Development of People has been active in working with the media and religious leaders as a long term investment in changing attitudes to the LGBTI community.

FREE screening and all are welcome.