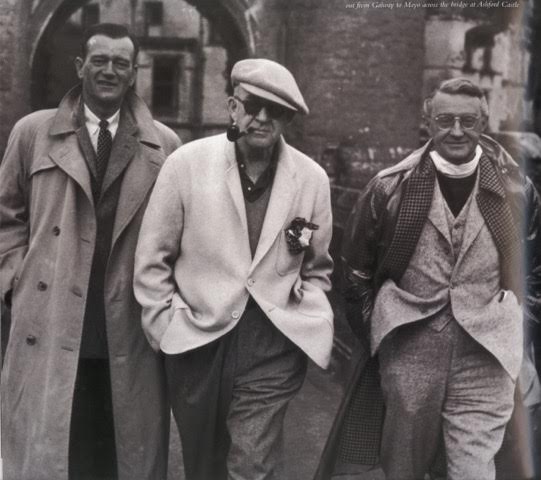 Huston School of Film and Digital Media (NUI Galway) are delighted to welcome Joseph McBride, author of the award-winning biography Searching for John Ford (2001) for a public lecture at the school entitled  “John Ford, Irish-American Poet and Comedian”.

McBride’s talk will take place on June 15th at 7pm is FREE and open to all and will make extensive use of clips from Ford’s Irish films including the Galway-shot Rising of the Moon.

“If there is any single thing that explains either of us,” John Ford once said to Eugene OʼNeill, “itʼs that weʼre Irish.” Their worlds intersected in 1940, when Ford directed his film version of OʼNeillʼs tetralogy of one-act sea plays, The Long Voyage Home.

John Ford, aka John Feeney (1894-1973), the American-born son of Irish immigrants, was a man of many varied and often conflicting moods, themes, and obsessions. Although Ford usually is identified with the Western genre, in which he made such masterpieces as Stagecoach and The Searchers, his vast body of work encompasses a wide range of subject matter. Perhaps closest to his heart were his films about his beloved Ireland.

For McBride, “Ford’s humor is one of his strongest and most characteristic attributes. Being both a “poet” and a “comedian” is essential to Ford’s tragicomic (and very Irish) view of the world and to the anarchic, subversive streak that coexists with his lifelong reverence for tradition.”

Joseph McBride is the author of  Searching for John Ford, hailed by both the Irish Times and the New York Times as the “definitive” biography of the director. A veteran writer for Variety, McBride has also written highly acclaimed biographies of  Steven Spielberg and Frank Capra. McBride’s interview with John Ford appears in his most recent book Two Cheers for Hollywood: Joseph McBride on Movies.

2017-05-26
GAF_admin01
Share
Previous The (Cinematic) Gospel According To Mark Cousins with Declan McGrath | Wednesday 21st June
Next A Break In The Clouds, a new short film recently shot in County Galway.