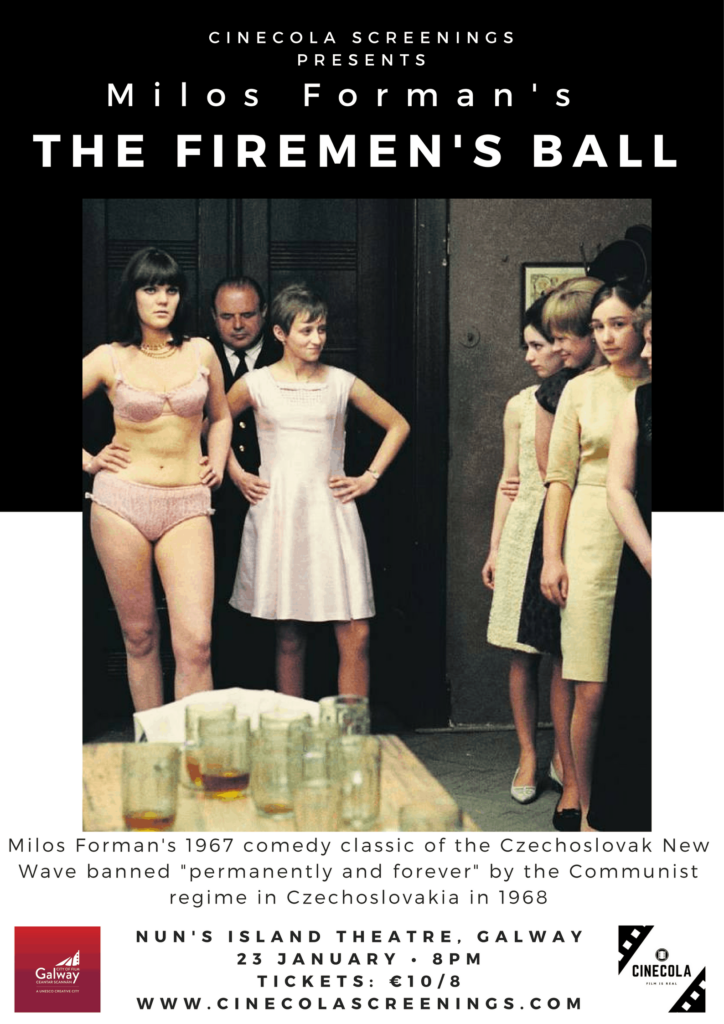 Cinecola Screenings is a new series of film screenings produced and curated by film critic Matt Micucci. It is running in Galway City of Film and aims to celebrate international arthouse films, both classic and contemporary, and to enhance awareness, accessibility and understanding of the art among a broad and diverse film-going audience.

The mission is not only to screen films that often escape mainstream Irish cinema distribution, but also to re-evaluate classics or underexposed films that may never have been screened in Ireland before, and to inspire conversations on, as well as a passion for, cinema in general. Each film will be preceded by a brief introduction and the hope is to make each one of the screening events more and more special as the series will continue.

The series kicks off on Monday 23rd January at 8pm with a special screening of The Firemen’s Ball, by Miloš Forman (Czechoslovakia / Italy, 1967).

“It’s the annual firemen’s ball in a small Czech town, and the organisers decide to liven up the usually dull event with a raffle and a beauty contest. But with the former plagued by thievery and the latter by bribery, the event rapidly descends into farce – and that’s before a fire breaks out. The last film that Miloš Forman (One Flew Over the Cuckoo’s Nest; Amadeus) made in his native country and language, The Firemen’s Ball is a sparkling comedy that’s also one of the best showcases of the director’s uncanny ability to extract flawless performances out of an entirely non-professional cast largely made up of actual firemen. It was nominated for an Oscar, but the Czech Communist authorities were so convinced that it was a satirical allegory about official incompetence that the film was officially “banned forever”, or at least until the 1989 Velvet Revolution. It’s now regarded as one of the greatest of all Czech films.”

This film is screened in Czech with English subtitles and Rated PG. The screening will be preceded by an introduction to the film by Matt Micucci.

Tickets are €8/€10 and can be booked through the Nun’s Island website: https://www.tickettailor.com/checkout/view-event/id/78798/chk/f65b