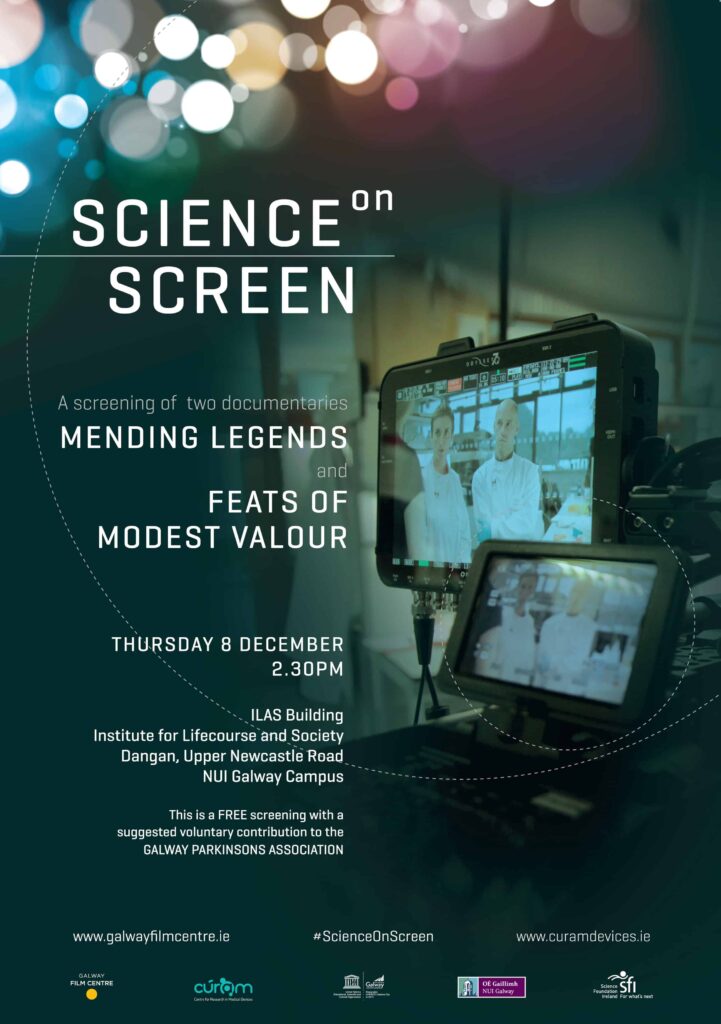 Galway City of Film and CÚRAM in NUI Galway are delighted to announce a FREE screening of the ‘Science on Screen’ documentaries this December.

What happens when scientists and filmmakers collide and what stories emerge? This was the question posed by ‘Science on Screen’, an initiative from Galway UNESCO City of Film with Galway Film Centre, CÚRAM at NUI Galway and with the support of Science Foundation of Ireland. The result has been two documentaries, which feature the groundbreaking world of medical device research taking place in CÚRAM.

‘Feats of Modest Valour’, is a touching portrait of three individuals with Parkinson’s Disease and the scientists who are developing a new medical device, which could potentially halt or even cure the disease; and ‘Mending Legends’, looks at the devastating effects of tendon injury on sports people and the team of scientists who are working to form the world’s first 3D cell assembled tendon prototype.

Storytelling through science was the ethos that underpinned these films and this is apparent from the rich characters that we encounter in both documentaries. In ‘Mending Legends’, presented by Máire Treasa Ní Dhubhghaill, we meet Jessie Barr who just missed out on the Rio 2016 Olympics due to tendon injury, made all the more bittersweet by her brother’s fourth placing in the 400m hurdles at those very same events. Pádraic Joyce, Galway football legend, also recounts playing through the pain for the love of the game. The exciting research led by Dr. Dimitrios Zeugolis that is taking place at CÚRAM, in NUI Galway, could make huge differences to sports people of the future. The film is produced by James Ryan of StationHouse Media in Kilbannon, Co. Galway and directed by Paul Webster.

In ‘Feats of Modest Valour’ we meet three individuals living with the physical challenges of Parkinson’s. Brian Carney from County Mayo works on the family farm, while Milena Lulic who lives in Galway city recounts her days in World War II in Croatia. Also Tom Hickey, Irish actor who recently received a lifetime achievement award at the Abbey Theatre from the President Michael D. Higgins, talks about how suffering for his art takes on a whole new meaning with the disease. Meanwhile, scientists led by Dr. Eilis Dowd continue searching for a way to halt the disease. The film is co-directed and co-produced by Mia Mullarkey and Alice McDowell of Ishka Films.

The ‘Science on Screen’ screenings will take place at 2.30pm on Thursday 8th December in the Institute for Lifecourse and Science (ILAS Building), on the NUI Galway campus and both documentaries are 26 minutes in length.

The screening will also include a showing of the 2015 and 2016 primary school winners of the ReelLife SCIENCE Schools Video Competition. This year’s winners are GAELSCOIL RIABHACH from Loughrea, Co. Galway with their video ‘Life in Space’, while the 2015 winners were SCOIL AONGHUSA SENIOR, Tallaght, Dublin 24 with their video ‘Scoil Aonghusa Rocket Launch’. Both of these videos are approx. 3 minutes in length.

This is a FREE screening with a suggested voluntary contribution to the Galway Parkinsons Association.