Home / News / The Boring Diary of Frances Noone screening at The Fleadh!

The Boring Diary of Frances Noone screening at The Fleadh! 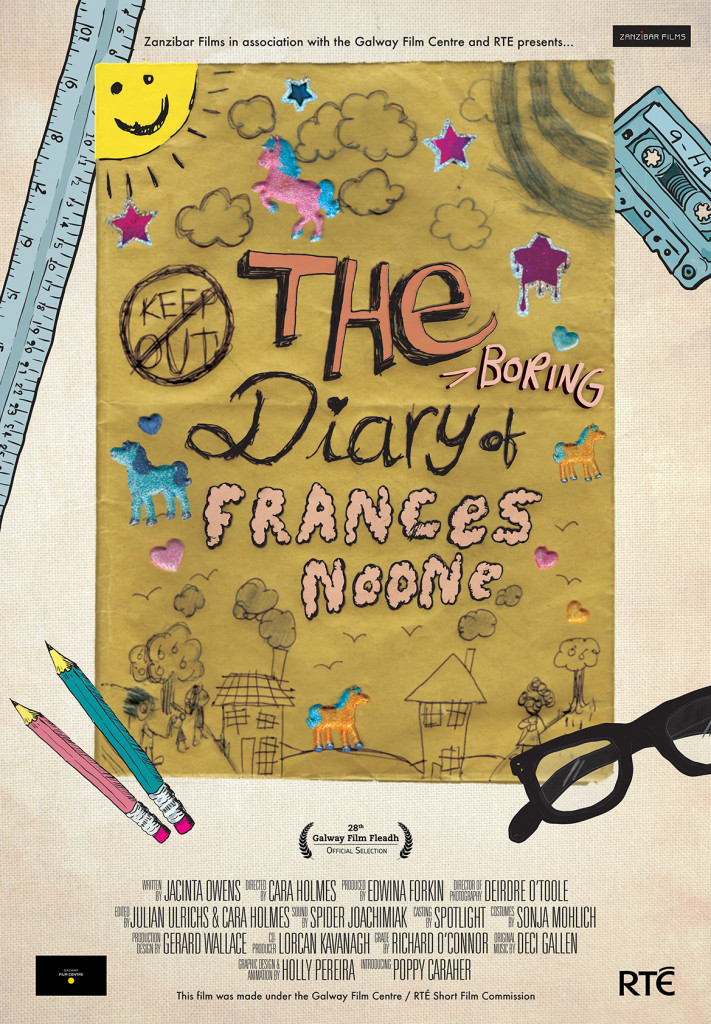 The Boring Diary of Frances Noone will screen at this years 28th Galway Film Fleadh!

“It’s 1987 in Northern Ireland. Frances Noone is ten years old and terminally bored. When her cruel teacher McEvilly tells her to write a diary of her weekend to read out in class Frances panics. Her life is so boring. There is nothing to do but watch the street from her window. When she goes to stay with her granny she realises her new neighbour is McEvilly. Eek! But what McEvilly doesn’t know is that her own secret antics with the headmaster will become the contents of Frances’s diary to be read on Monday morning.”

The Boring Diary of Frances Noone was selected for the 2015 ‘RTÉ / Galway Film Centre Short Film Commission Scheme‘. Scriptwriter Jacinta Owens worked with Script Editor Deirdre Roycroft to develop and refine her short film script. The film is directed by Cara Holmes and produced by Edwina Forkin.

The Galway Film Fleadh screening will take place in the Town Hall Theatre on Thursday 7th July at 12.30pm.

Cara Holmes ​is an award-winning film and television director and editor. S​he ​is a creative editor who incorporates powerful visual images and the observations of people into intimate, multilayered forms of storytelling. Cara has recently directed and edited, ‘Queen of the Plough’. This short film won Best Short Documentary at the Galway Film Fleadh in 2015. Other directing credits include: ‘Our Gemma‘, ‘Runs in the Family‘, ‘If you like it you should be able to put a ring on it‘ and ‘Feminism 101‘ Her films focus on LGBT, Feminism and Disability rights. ‘The Boring Diary of Frances Noone‘ is Cara’s first foray into directing drama. www.caraholmes.com

Edwina Forkin set up Zanzibar Films in 2002 where she has created a strong, strategic, dynamic company. Zanzibar Films has now established itself as one of Ireland’s most exciting and promising film and television production companies. Its aim is to produce quality, entertaining projects with a main criteria being working with emerging talent who share the Zanzibar sense of enthusiasm, dedication, love of film and life in general. www.zanzibarfilms.net

See the Galway Film Fleadh website for the listing: http://www.galwayfilmfleadh.com/index.php/project/new-irish-shorts-2-2/

2016-06-27
GAF_admin01
Share
Previous Photos from 100 Years of Cinema: The Irish Short in An Taibhdhearc
Next Galway City of Film visits Bradford City of Film