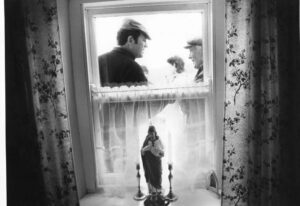 Galway UNESCO City of Film is screening a double bill of Our Boys & Budawanny as part of the 100 Years of Cinema: Film & The Church event on Saturday 19th March at 1.30pm.

Our Boys, directed by Cathal Black, is a politically and technically bold short docu-drama that fuses dramatisation, interviews, and archive footage in an exposé of the culture of fear and brutality that defined the regime in educational institutions run by the Christian Brothers.

“Part of Ireland’s ‘First Wave’ of independent filmmakers in the 1970s and ‘80s, Cathal Black began to explore the contradictions, problems and preoccupations within Irish society in a way which hadn’t before been attempted in film. He wanted to “make Irish films for Irish audiences, pictures that are recognisably Irish but stand up to European notions of style . . .  to be truthful to our own visual interpretation of this country and reach Irish audiences our way.” Cathal Black is an Aosdána member and filmmaker who has sustained a visionary cinematic practise for almost 40 years.” Irish Film Institute

Budawanny, directed by Bob Quinn, is a contemporary silent film, made in 1987 and acknowledged by many as perhaps Bob Quinn’s greatest achievement. This fascinating and rarely seen film tells the story of a young priest, played by the great Donal Mc Cann, who becomes romantically entangled with his housekeeper.

Bob Quinn is an independent filmmaker who continues to live and works in Conamara. In 1985 he was the first film maker to be elected member of Aosdána and in 2001 he received a Lifetime Achievement Award from the Irish Film Institute for his contribution to filmmaking in Ireland.