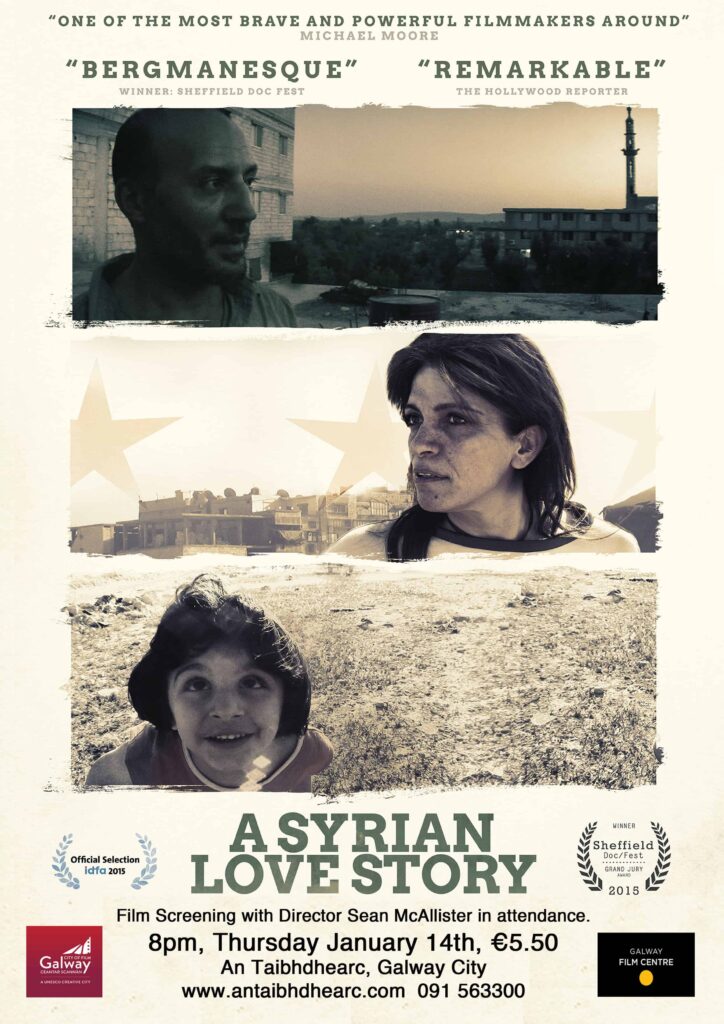 Galway City of Film are delighted to present this award-winning film on Thursday January 14th, with director, Sean McAllister in attendance. The film received the Grand Jury prize at this year’s Sheffield Documentary Festival for this “Bergmanesque portrait of a relationship and love”.

Filmed over 5 years, A Syrian Love Story charts an incredible odyssey to political freedom in the West. For Raghda and Amer, it is a journey of hope, dreams and despair: for the revolution, their homeland and each other. It tells the poignant story of their family torn apart by the tyrannical Assad dictatorship. Filming began in Syria in 2009, prior to wave of revolutions and changes in the Arab world – at the time, Raghda was a political prisoner and Amer was caring for their young children alone. We filmed in the thriving heart of the Yarmouk Camp in Damascus – now an infamous news story as its inhabitants are being starved to death by the Assad regime. At 4 and 14, Bob and Kaka have already spent their whole lives watching either their father or mother go to prison for their political beliefs. Quiet, considerate and mature, Kaka tells me how he is prepared to follow his mother and father to prison for the price of freedom.

This intimate family portrait helps us to understand why people are literally dying for change in the Arab world. Yet, as Raghda is released from prison, filmmaker Sean McAllister himself is arrested for filming and the political pressure around all activists intensifies. The family flee to Lebanon, and then to France where they are given political asylum in the sleepy town of Albi, where they now watch the revolution from afar, waiting for Assad to fall.

However, in exile, Raghda’s mental heath suffers. She attempts suicide. We see their new life in France develop but the war is now between them. In finding the freedom they fought so hard for, their relationship is beginning to fall apart.

For more information on the film see www.asyrianlovestory.com and on Director Seán McAllister see www.seanmcallister.com.