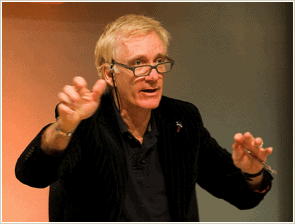 This one day masterclass, in association with Screen Training Ireland, identifies the key elements of factual storytelling and how to make formats work. Tutor, Robert Thirkell, will use case studies with real shooting scripts and rough-cuts. He will demonstrate how to structure stories so they have drive and drama, how to script and plan programmes before shooting and how to fix problem productions.

Based on Robert’s C.O.N.F.L.I.C.T. seminar, the course will cover the following:

And finally the importance of Timeline to get you out of a mess, the Title and Truth so you can be both bold and honest.

There will be clips shown of ‘before and after’ including Jamie’s School Dinners and the Boy Whose Skin Fell Off including roughcuts off both when they were failing, and show how these techniques transformed them into Bafta and Emmy winners. You won’t just listen to a riveting performance in storytelling, but will have the challenge of transforming an impossible pitch (that became a hit) yourself, and restructuring a failed roughcut.

This course is part of a series of seminars/workshops on Writing For Non-Drama Television. These will include:
•    A Workshop on Commentary Writing for Television with Patrick Uden (January 19th, 2016)
•    A Day of Case Studies of Irish TV Series & Documentaries. Contributors will include Andrew Gallimore and Gerry Hoban. (Feburary 5th, 2016 TBC)

Tutor Biography
Robert Thirkell is a TV Troubleshooter, and film repairman responsible for many hit TV documentaries and formats. He specialises in helping to create documentaries and format factual films and series at their inception, guaranteeing their quality and storytelling, and also in helping them get on air when problems need solving, especially when a bit of extra storytelling and character is needed.

Since leaving the BBC in 2003 Robert has specialized in helping broadcasters and production companies, in the UK and abroad, to create documentary formats, oversee new brands, and sort out problem series, as a creative consultant, series editor, and troubleshooter, always applying the strong narrative storytelling for which he is renowned. He directed Troubleshooter, which won the BAFTA for originality. As a result he was able to create and build business documentaries on the BBC, making them into the most successful in the world, and making a raft of original and popular formats. He went on to win the first two BAFTAs in the new formatted features category for the series Back to the Floor and Blood on the Carpet which created the modern formatted revolution. More recently Robert was Series Editor of Jamie’s School Dinners, winning another BAFTA, and troubleshooter for The Boy Whose Skin Fell Off which won the International Emmy. Other credits include Sex with Mum and Dad, Don’t Tell The Bride and Big Chef takes on Little Chef. Robert is currently working on numerous series for UK broadcasters and production companies, as well as consulting around the world.

THE HUMAN PLANET: Major BBC/Discovery international documentary coproduction, winner 7 BAFTA awards, the most for any programme in its year.

THE DAY THE IMMIGRANTS LEFT: Leopard for BBC, cited by BBC1 Controller Jay Hunt as favorite programme, an audience hit with over 5m, viewers, a stunning 25% for current affairs.  Nominate Rose d’Or . Created another new genre including.

THE TOWN THAT NEVER RETIRED: Silver River for BBC, success about how we support our old people.

GIVE US THE MONEY: STV Sweden/BBC coproduction/trans europe, part of major international Why Poverty season.

THE PLAN: another Feature documentary follow up to award winning hit The Planet, Swedish and pan European production on how we solve pollution crisis.

2015-10-22
GAF_admin01
Share
Previous Producer & former GFC Board Member Adrian Devane of ‘2000 AD Productions’ interviewed by IFTN.
Next ‘There and Back’, Trish Kellys short documentary selected for award at the Feminist Film Festival Dublin