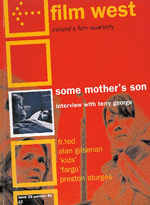 From Hollywood Barracks to Hollywood Boulevard– Seamus McSwiney in an exclusive interview with Terry George the director of ‘Some Mother’s Son’
Drinks! Girls! Feck!– Nicky Fennel spoke to Arthur Mathews and Graham Linehan about ‘Fr.Ted’ and writing for sit-com.

Alan Gilsenan Interview– The director of documentary classics like ‘The Road to God Knows Where’ and ‘Home Movie Nights’ spoke to Pat Collins about his work to date
Larry Clarke Interview– Derek O,Conner interviewed Larry Clarke, the first time director of ‘Kids’
MIP TV– Muiris Mac Conghail reports on some of the important findings at this year’s MIP Cannes
The Rocky Road to Dublin– Vincent Browne looks back at Peter Lennon’s controversial 1968 documentary, ‘The Rocky Road to Dublin’
Celtic Film Festival– Muiris Mac Conghail was a jury member at the Celtic Film Festival. Here he writes about the quality of films at this year’s festival at Bangor, Wales
The Luck of the Draw– Mike Casey interviews Edith Pieperhoff about her work in animation
Kieslowski Tribute– A short tribute to the late, great Kieslowski by Adrian Byrne
The Last of the High Kings– Sarah Caden spoke to David Keating, the director of ‘The Last of the High Kings’ which will receive its premier at the Galway Film Fleadh 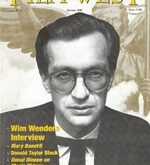 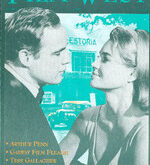 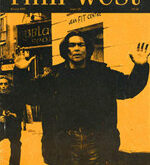