Galway City of Film is delighted to promote NUI Galway’s ‘ReelLIFE SCIENCE’ video competition. This competition is open to all primary and secondary schools in Ireland and Canadian Astronaut Chris Hadfield has just been announced as a guest judge!

Commander Chris Hadfield, Canadian Astronaut, has been announced as guest judge for NUI Galway’s ReelLIFE SCIENCE 2015 competition. The University is challenging all primary and secondary school students across Ireland to produce engaging and informative short videos communicating a scientific topic for the this year’s competition.

Supported by the Science Foundation Ireland Discover programme and the CÚRAM Centre for Research in Medical Devices, ReelLIFE SCIENCE will award €3,000 directly to the winning schools for science promotion.

Speaking ahead of the competition, Commander Hadfield said: “I am very much looking forward to seeing the science videos that Irish students will be making! Discovery and creativity, turned loose by imagination. A great project that I am proud to be a part of.” 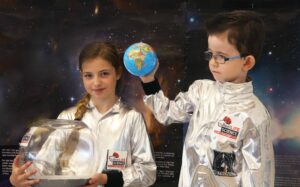 Secondary school topics include ‘Incredible Life’ and ‘Heroines of Science’, while primary school students can choose from ‘Science in Space’, ‘The Soil is Alive!’ and ‘Design your Future’, among others.

Closing date for submissions is Friday, 16th October. The winning schools will be announced on Monday, 9th November during Science Week 2015, when they will be invited to attend a public screening and awards ceremony during the Galway Science and Technology Festival on 22nd November.

ReelLIFE SCIENCE is organised by Dr Enda O’Connell and a team of science communication enthusiasts from NUI Galway, in collaboration with the Cell EXPLORERS outreach programme from the University’s School of Natural Sciences. The competition has been running since 2013 and previous year’s videos, made with cameras, tablets and smartphones, have tens of thousands of views in over 100 countries.

In 2014, the ReelLIFE SCIENCE challenge was taken up by thousands of students in 24 counties around Ireland, producing hundreds of three-minute science videos for the competition, in both English and Irish. Last year’s judge Dr. Aoibhinn Ní Shúilleabháin said: “I was astounded by the calibre of the videos from both the primary and secondary schools. It is wonderful to see the thought, preparation, fun, and learning that went into all of the videos and it is very encouraging to see students enjoying and communicating science.”

Previous year’s videos and more information about the 2015 competition can be found at www.reellifescience.com. 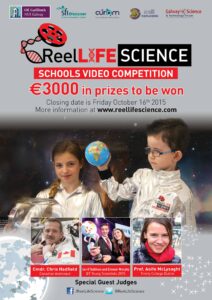