Galway’s Arthouse cinema, the Galway Picture Palace is set for completion after it received a funding boost of €735,000 from the Department of Arts, Heritage and the Gaeltacht.

The three-screen cinema will be the first of its kind in the West of Ireland and will be a key part of Galway’s UNESCO City of Film status. Galway is just one of five cities worldwide to receive the permanent UNESCO honour. 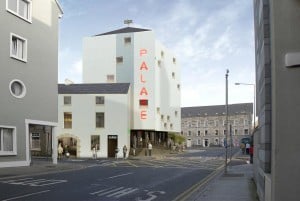 Making the announcement, Minister Heather Humphreys said: “This will come as a significant boost to Galway, which of course is one of this country’s main cultural hubs. The State has already invested considerably in the Picture Palace project, so I am very pleased that its future has been secured. When completed, the Picture Palace will be a state-of-the-art three screen cinema, complete with a cafe and book shop.”

Ms Humphreys said she was “delighted” a plan had been agreed to complete it; involving a partnership between her department, Galway City Council and Solas Picture Palace.

The Picture Palace was spearheaded by Lelia Doolan and was designed by architect Tom de Paor, with a window by the late Patrick Scott.