Apples of Golan screening in Galway

Apples of the Golan by local filmmakers Keith Walsh and Jill Beardsworth to screen in the Town Hall Theatre in Galway on Wednesday 11th March at 8pm. 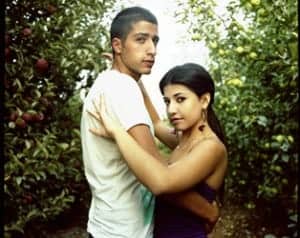 The film tells the story of Majdal Shams, one of five remaining Arab villages in the Israeli-occupied Golan Heights. Before the occupation there were 139 of these villages, which have now mostly been destroyed. The (Galway-based) directors Keith Walsh and Jill Beardsworth spent five years among the people of this community, who have been cut off from their homeland since the events of the Six Day War.

The film covers the four year period up until the Syrian conflict begins to turn into civil war, as the effects are being felt in the Golan Heights.

The film has received excellent reviews in The Irish Times, Entertainment.ie, RTE.ie and has had a very successful run at the IFI in Dublin.

The directors Keith Walsh and Jill Beardsworth will participate in a Q&A after the screening.