SONG of the SEA: Industry Preview to Open Dingle IFF and Animation Dingle

The festival is so delighted to open the weekend with an Industry preview of the hugely anticipated animated feature film, the Oscar nominated SONG OF THE SEA.

Kerry County Council Tourism have supported the festival in bringing the film to the peninsula and allow us to welcome back to Dingle again the film’s director Tomm Moore and its producer Paul Young to present the film. UK press are flying in especially to see the film. 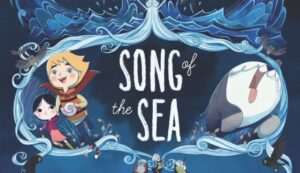 “I’m delighted to return to Dingle after a fantastic year for our film Song of The Sea which I presented as a work in progress last year at the festival. The Animation Dingle event is very special and since Song of The Sea was originally inspired by a trip to Dingle a few years ago it’s fitting that we return with it this year for a special industry preview screening prior to the official premiere in Galway this July! ” Tomm Moore

Animation Dingle has grown substantially in the past year with our partner JAM Media.  This year we will have presentations from many broadcasters, publishers, buyers and producers including; Nickelodeon, Disney, CBBC & RTE; Penguin, Walker Books & Scholastic; Kavaleer, Treehouse, Salty Dog, Geronimo and Cartoon Saloon. The Animation Dingle Conference will include a keynote speech from Tim Patterson of Nickelodeon and will be opened by James Hickey, CEO of Bord Scannán na hÉireann/The Irish Film Board and our Official Festival Industry Partner. The festival will also present some excellent animation screenings of the best animation work here on the island today.

We bring you Ireland’s first ever awards for animation, The Animation Ireland Awards, taking place in The Skellig Hotel on Friday 13th March. We are honoured to be part of this event with Animation Ireland and good luck to all the nominees on the night.

Much more to be announced, you can find all festival details and purchase your tickets at www.dinglefilmfestival.com