A Documentary of An Irish Adventure
Can there be anything more enjoyable, on a cold winters evening, than snuggling down in front of the telly and watching a bunch of cold, tired and seasick explorers doing battle with the elements? Well, that is exactly what TG4 has on offer at 20.00h on St. Stephen’s Day. 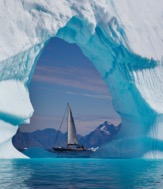 Last Summer, under the watchful eye of veteran adventurer Jamie Young, a novice crew of men and women sailed from Killary Harbour in County Galway to the wilderness of Greenland, deep inside the Arctic Circle. Once there, a team kayaked 500km along the spectacular Greenland coast while another team attempted to climb unconquered towering rock-walls.

Among the crew were film maker Claire Riordan and photographer Daragh Muldowney. Their images make up this fascinating documentary. Between them they captured the range of experiences and emotions encountered by our brave adventurers; from the harsh realities of life on the North Atlantic in a cramped 49ft yacht, to the heart-achingly beautiful scenery of a landscape under threat; from the vast isolation of the Arctic Circle to feasting with locals on whale blubber, walrus and polar bear stew!

Jamie Young’s ambition for this voyage was to pass on the spirit of adventure to a new generation of Irish people. Tune in on St Stephen’s evening to see if he succeeded.