Mayo Arts office were delighted with the launch of the Film Mayo website on Monday 1st of December in Knockranny House Hotel. Film Mayo is a new website, dedicated to the development of film in the county.

The launch was a three tiered event which kicked off with the inaugural Film Mayo Network meeting. With Croagh Patrick as the stunning backdrop in the beautiful La Fougére Restaurant in Knockranny House Hotel Westport, filmmakers had the opportunity to meet, chat with each other and make useful contacts.

The second tier to the day was a Q&A/ Interview with a very distinguished line-up of filmmakers – Director ;Pat O’Connor, Writer/Director/Producer; Mike Cockayne, Producer; Tim Palmer and Scriptwriter/Director; Antony Foutz. Director Pat O’Connor was the guest of honour for the Film Mayo launch, among his many accolades Pat directed Ballyroom of Romance in Ballycroy, Co. Mayo. Pat has a great love for Mayo and fond memories of shooting the Ballroom of Romance. Pat had an opportunity to revisit Ballycroy, prior to the launch, to meet with some of those that took part in the film and to reminisce.

Mike Cockayne recently co wrote, produced and directed The Hardy Bucks Movie for Universal Pictures with the backing of the Irish Film Board. The film was box office No.1 on its opening weekend and was the most successful Irish film of 2013. The film was based on the popular RTE Hardy Bucks TV series, which itself was developed from a successful web series. Mike is originally from England but he loved filming in Mayo so much he moved to Mayo. 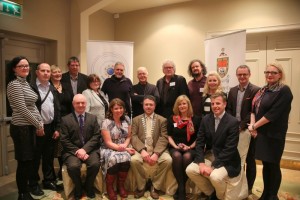 Producer Tim Palmer’s feature credits include, Into the West written by Jim Sheridan directed by Mike Newell and starring Gabriel Byrne and Ellen Barkin, The Last of the High Kings with Jared Leto, Gabriel Byrne, Stephen Rea, Colm Meaney and Christina Ricci and A Love Divided with Orla Brady and Liam Cunningham. In 2013 Tim produced Terry Mc Mahon’s award winning Patrick’s Day. Tim has a new project with Terry in development. Tim also harbours a soft spot for Mayo and is a regular visitor to Mayo.

Anthony Foutz is the son of a Walt Disney company executive and earned his stripes in the film industry working as an assistant director in Italy to such luminaries as Orson Welles, Gillo Pontecorvo and Marco Ferreri. He was also part of a hip, avant-garde set that included artist Mario Schifano and Anita Pallenberg. Other works in his fascinating archive include Maxagasm, a film vehicle for the Rolling Stones, co-written by Sam Shepard. Mayo is fortunate enough to count Anthony Foutz as one of their own as he lives in Mayo.

There was a great crowd of creatives in attendance at the panel discussion which was chaired by Access Cinema’s Director, Maeve Cooke. Photographer Liam Lyon’s stunning images of Mayo were projected in the background as the panel gathered momentum. There was positive feedback from the Q&A with the filmmakers in the room saying they found it very inspiring and were delighted to be in the company of such great filmmakers.

During the launch, stunning images of Mayo supplied by Angela Campbell, Heverin Photography, Liam Lyons and Photography by Jessica were displayed on the large TV screens in Knockranny House Hotel, the images were interspersed with testimonials from film makers who shot in Mayo, advocating Mayo as a film location.