Home / News / Win a pair of tickets to Standby

Win a pair of tickets to Standby

The film tells the story of twenty-something Alan (Gleeson) who is is down on his luck. Stood up at the altar and recently fired from his banking job, he finds himself working with his mother as a part-time tourist advisor at Dublin Airport. It’s there he comes face to face with first love Alice (Paré), stuck on standby for a flight home to New York. Their summer romance ended eight years previously with Alan promising to return to the US one day. He never did, and they haven’t spoken since. Seizing his chance, Alan convinces a reluctant Alice to stay one more night in Dublin. 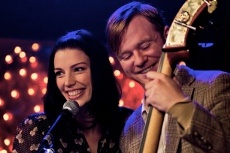 The film was very well received at Cork Film Festival last weekend and will be released in both The IMC Galway and The Eye Cinema this Friday.

There is a preview of the film this Thursday November 13th at 7pm in the IMC Galway, with one of the directors and the writer in attendance and we have 3 pairs of tickets to give away to that.

To win , simply share this link on Facebook and email the answer to the following question to info@galwayfilmcentre.ie with STANDBY Competition in the subject, What city is Standby set in?