Galway Film Centre/ RTÉ short script award winner 2013 ‘The Weather Report’ has been selected for the prestigious Shnit International Short Film Festival. Shnit is a multi-location short film festival, taking place in its home base of Bern, Switzerland and in 7 other locations worldwide. 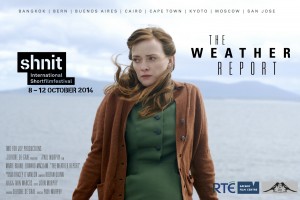 ‘The Weather Report’ was one of sixty-four shorts selected from over seven thousand entries received from around the world.  Films in the international competition are competed for 3 prizes of US$20,000 each – one for best short under 10 minutes, one for under 20 minutes and one for under 40 minutes. There is also an audience award for the same amount.

‘The Weather Report’ is the work of Galway Film-makers Paul Murphy (writer/director) and Deirdre de Grae (producer).  It features a fantastic crew of recent and not so recent GMIT Film and TV graduates, including editor, John Murphy, DP, Ivan Marcos and production designer, Tracey O’Hanlon. It stars Edward MacLiam (‘Run and Jump’) and Marie Ruane. Marie (pictured) is also from county Galway and is best known for her role in the RTÉ series ‘Raw’.

Shnit International short film festival takes place from 8-12 October in Bern and The Weather Report will receive 3 screenings as well as at least one in all the other locations. Other Irish shorts ‘Ghost Train’ by Lee Cronin and ‘But I married you Ma instead’ by David Balfe are also in the programme.  For more details go to http://shnit.org/en/