Jimmy McGovern will take part in an in-depth interview about his writing career with former GMIT Film & TV Course Director, Patsy Murphy, as well as a smaller workshop focussing on writing his first feature, NEEDLE. 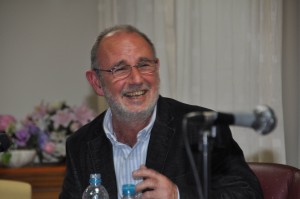 He moved from BROOKSIDE in 1989 when he felt the soap was shying away from important issues such as the Hillsborough disaster. After having his first feature commissioned by BBC (NEEDLE), new opportunities arose and he created some of his most famous work such as CRACKER about forensic scientist played by Robbie Coltrane. He also created the drama documentary HILLSBOROUGH, which lead actor Christopher Ecclestone said ‘was the most important work he’s ever done as an actor’.

In recent years, Jimmy is famed for his collaborative approach to writing, as well as nurturing new talent and finding new voices. This is reflected in shows such as THE STREET and REDFERN, which is the first Australian TV Drama written by indigenous writers.

Prolific as ever, he is currently working on BANISHED, a TV drama set in 18th century Australia as well as COMMON, a TV film set in North West England, both for BBC.

The public interview with Jimmy will look at specific scripts and examine his approach to writing for the screen and costs €25 to attend. The workshop, for a smaller group, will delve into the mechanics of writing a first feature and also costs €25 to attend. Application for the workshop is competitive and the deadline is May 26th. To apply email a brief, up to date, relevant CV to education@galwayfilmcentre.ie

The event will take place in The Harbour Hotel, Galway city on Friday June 6th.