Positive Reviews for Scratch at Tribeca

Scratch, a 2012 Galway Film Centre/RTÉ Short Film Award Winner, has been receiving very positive reviews at Tribeca. The film is written and directed by Phillip Kelly and produced by Dave Leahy.

It was voted in the top twelve list of Tribeca by one review website. They commented that:

They make good short films in Ireland. Scratch is an absurd, fast-paced comedy set in a small town gas station. Everyone knows each other here, which makes it a bit awkward when someone tries to rob the joint. It’s somewhere between Clerks and the dark comedies of Martin McDonagh.

The film stars Conor Drum, Stephen Jones (Between The Canals), Sam Keeley (What Richard Did, This Must Be The Place) & Ian Lloyd Anderson (Love/Hate). 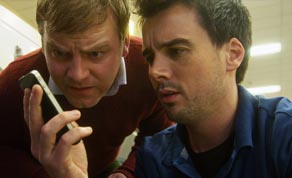 The film has also been screened at:

Trailer for the film available HERE

The deadline for the current GFC/RTÉ Short Film Award is May 9th 2014. More info HERE.