An in-depth discussion on the writing and development of LOVE/HATE will be one of the many events at Galway Film Centre’s Talking TV Drama seminar this October. Screenwriter and showrunner Frank Spotnitz (HUNTED, The X-FILES) will also be interviewed about his vast body of TV work.

As always, this two-day event will bring together writers from successful TV shows around the world to talk about their work and the craft of screenwriting. Writer, Stuart Carolan, director, David Caffrey and actor, Tom Vaughan-Lawlor will take part in a discussion with Emmy-winning director, Dearbhla Walsh, about the evolution of LOVE/HATE, one of Ireland’s most successful and critically-acclaimed shows.

The event will take place in The Harbour Hotel on Thursday 17th and Friday 18th of October and is supported by Screen Training Ireland, the BAI, TG4, Bord Scannán na hÉireann/the Irish Film Board and RTÉ.

Frank Spotnitz is an award-winning writer, producer and showrunner best known for his work on The X-Files. His latest series, HUNTED, aired on BBC1 and HBO Cinemax in 2012. Spotnitz served as executive producer and wrote or co-wrote more than 40 episodes of The X-FILES . He was a producer and co-writer of both X-FILES feature films, FIGHT OF THE FUTURE (1998) and I WANT TO BELIEVE (2008).He is currently writing a four-hour adaptation of Philip K. Dick’s classic novel, THE MAN IN THE HIGH CASTLE, for Ridley Scott.

Other writers taking part are Bryan Elsley, writer and co-creator of SKINS, creator of DATES and writer of THE CROW ROAD and Oscar-nominated Tom Bidwell, who will discuss writing MY MAD FAT DIARY for E4.

2013 will be the third year of this seminar from Galway Film Centre which has hosted writers such as Vince Gilligan (BREAKING BAD), Hans Rosenfeldt (THE BRIDGE), Bryan Cogman (GAME OF THRONES), and Richard Cottan (WALLANDER). Early booking is strongly advised as places are limited and this event sold out last year. Programme below.

This event is run in partnership with Screen Training Ireland, the BAI and is supported by TG4, the Irish Film Board/ Bórd Scannán na hÉireann and RTÉ. Galway Film Centre is funded by The Arts Council.

When and Where: October 17th & 18th, 2013, The Harbour Hotel, Galway City
Fee: €80 unwaged/ €90 waged. Please note places are limited for this event.
How to Pay: To secure your place, post a cheque/draft/postal order to Galway Film Centre, Cluain Mhuire, Monivea Road, Galway. Please include your name and email with the payment. If you want to pay online, please email info@galwayfilmcentre.ie for bank details.
More info at: 091-770748 or info@galwayfilmcentre.ie
Twitter Hashtag: #galwaydrama

Friday, October 18th
THE JOURNEY OF AMBER – 10am – 11.30am
AMBER is a 4 part series, which has sold to US, Australian, Canadian and Scandinavian broadcasters and will be broadcast on Irish TV in January 2014 & BBC4 in April 2014. This panel examines the genesis and the journey of this TV Drama.
Rob Cawley (Writer/Producer) – AMBER
Gary Duggan (Writer) – AMBER
Paul Duane (Writer/Producer) – AMBER, SECRET DIARY OF A CALL GIRL
Muirinn Lane Kelly (Chair) – Writer

In Conversation with US Showrunner, Frank Spotnitz -1.00pm -3.00pm
Frank Spotnitz (creator of HUNTED and writer and executive producer on The X-FILES) will discuss his approach to writing for TV.  He is currently writing a series adapted from the TRANSPORTER hit movie franchise, and is writing and co-producing an adaptation of Philip K Dick’s THE MAN IN THE HIGH CASTLE for Ridley Scott.
Frank Spotnitz (Writer) – HUNTED, THE X-FILES
Shane Perez (Chair) – Writer 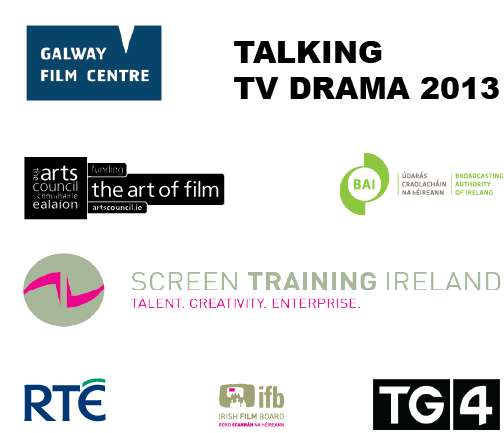